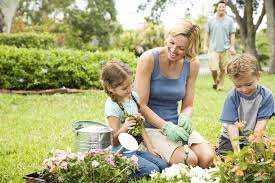 I have favorite names for my ‘gardens’.

The names are a bit grandiose in relation to the actual ‘gardens’ but it helps me remember which is what and where. I assure you it is entirely on purpose to no purpose except to point an old mind in the right direction.

You have to remember that I am more than 68 years old and my memory is impaired. I am scheduled for a 4-hour session with a neuropsychologist next week.

That sounds a bit scary and it is. But maybe this doctor can find where I lost my memory. I don’t remember where I put it.

We may only get through two gardens in a post. We’ll have to see how much gabbing I do.

The west side garden is probably the best place to start since it has the fewest plants.

You can learn about Chokecherry Bushes here.

The major drawback to this location is that we can’t see the birds feeding on it.

It does well most of the time.

But in rural areas, they are outrageous and dangerous. Cars have slid into a ditch after striking a patch of caterpillars. 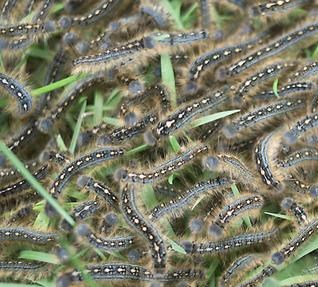 Bob King An invasion by an army of forest tent caterpillars swarm the yards of residents in Lakewood Township. 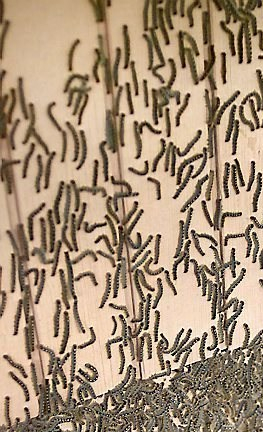 fileCATERPILLAR0110c4 — t5.31.00 Bob King — kingICK2c1 — Hordes of forest tent caterpillars wriggle up the walls of a home on Apple Ave. in Lakewood Township this week only to fall back down in a pile and try again. 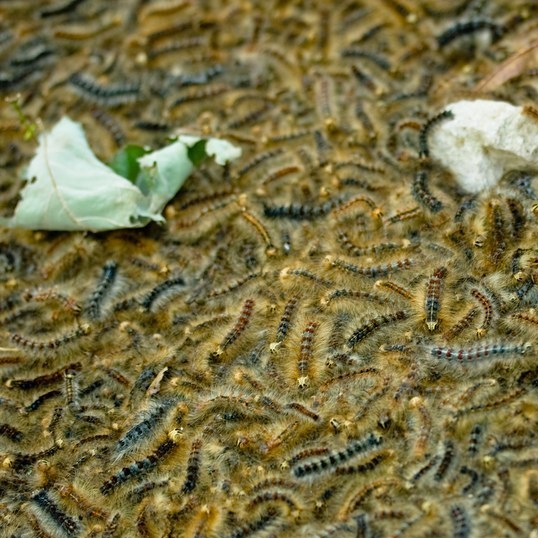 Just a glimpse of these crawling masses of Army worms is sufficient to bring back the odor of thousands (4 million can reside in one acre of a forest!) of these squished by car tires on rural roads.

They are nasty, ugly and bright green when squished.

People line the trunks of their expensive flowering trees to prevent these worms from climbing into the branches and devouring every last leaf.

Most of the time trees recover in the same season from being de-foliated. But there are times when the march of the Army worms is a contributing cause of trees dying.

I take this time to introduce you to one of my favorite image makers. Her name is Annie Spratt. Her images are found on Unsplash.com. You can download any image by thousands of professional photographers for FREE!

All the images are covered under Creative Commons License. 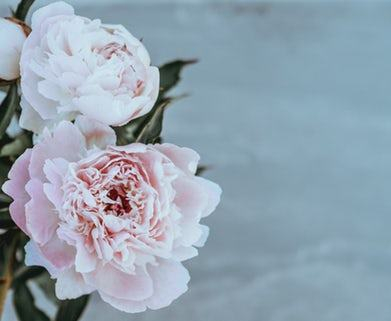 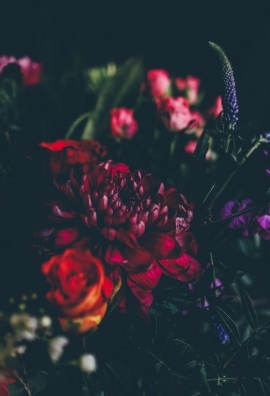 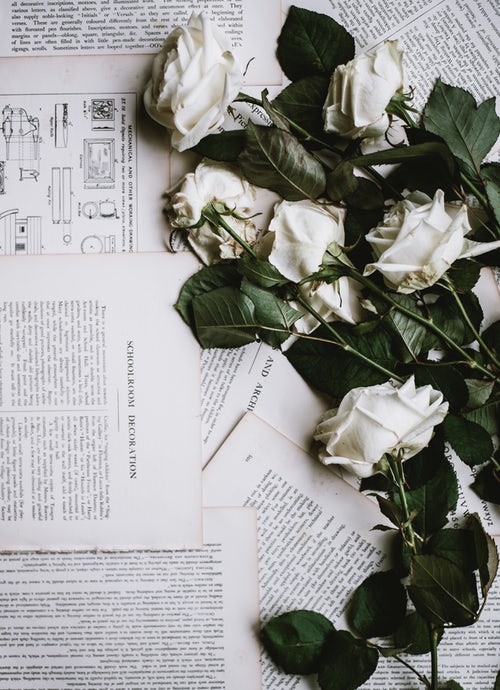 In the west side garden, in addition to the chokecherry bush, we planted two Jens Munk roses in memory of Becky’s sister Sue. These Canadian Explorer roses have blossoms that may look frail but their canes are not in the least frail or fragile.

They have nipped a grandchild or two so they just stay out of that area of the yard now.

Ms. Munk looks after herself. Her thorns are almost a wicked as the rosa glauca (more on that rose later).

In the background of this garden are Iris. This is a picture of the bulbs we grew.

This is a link to many other varieties of Iris.

The next flower is a favorite of Becky’s. Lily of the Valley.

A Lily of the Valley short primer is here.

The fragrance of this Lily is intoxicating. This flower can be invasive depending on where you plant them.

One last concern with Lilies of the Valley is pets. These Ladies are poisonous to cats and dogs. If ingested you will see vomiting and diarrhea.

As with all plants it pays to do the research. I once heard weeds described as flowers that are just in the wrong place.

I have hewed to this theory. As undergarments to many of the roses, I planted dead nettle in many of the beds. It is invasive and I planted purple and silvery pink flowers.

Within a few years of planting, they had filled the ground under the roses and choked out many other weeds. Their luminescent foliage was a pleasant sight when not many other flowers were in bloom. 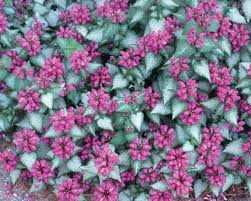 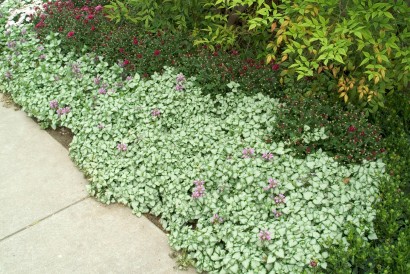 The next flower in this garden is Globe Thistle. I planted two of these and they rewarded us with large and robust plants. 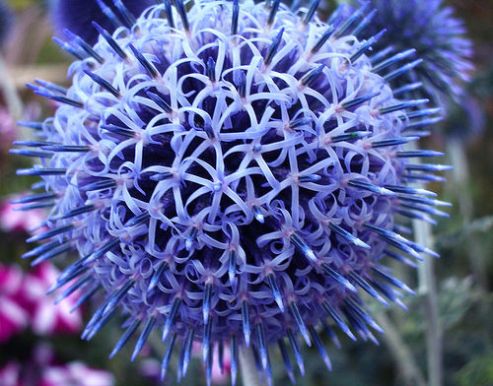 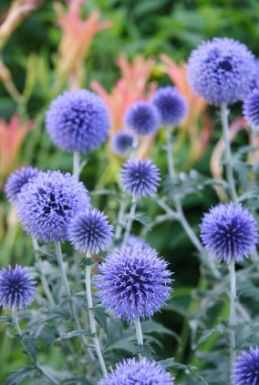 This plant wraps around the corner of the house and shares some space with our Jackmani Clematis. 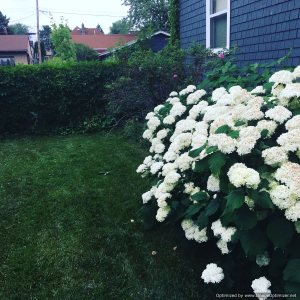 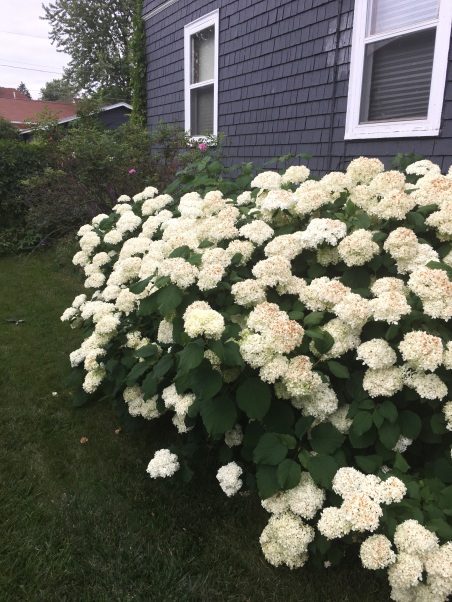 Our Viburnum ‘Snowball Bush’  was about 6 feet wide when we moved in. After fertilizing and cutting back to the ground several times it prospered and grew to about 15 feet wide.

A caveat, in the wet spring early summer the flowers will rust quickly just as white lilacs do.

I would casually look up the Viburnum and then Hydrangea at different times. I would wonder why our Snowball Bush didn’t have the full shape that Annabelle Hydrangea has.

Next post we will look at Turkestan Burning Bush and a BIG chunk of Bluestone.

Thanks for stopping by.